In this buying guide, we are taking a look at Canopy, Pergola, and Gazebo shelters. By the time you are finished reading this guide, you will understand what these three types of shelters have to offer, what separates them from each other, and which of these shelters offers what you need.

What’s The Difference Between Canopy, Pergola, And Gazebo?

To answer this question properly, we must first define what, exactly, a canopy, pergola, and gazebo are. From that, we can then define the specific differences that they consist of and what sets one apart from the other. That way, you can then decide which one is right for you.

What Is A Canopy?

In essence, a canopy is a fabric that is elevated by – more often than not – metal poles. Out of the three roofs we’re looking at, canopies are the most affordable and the most portable, due to the materials that they use.

Most people use canopy roofs when setting up large outdoor events. If you go to outdoor markets or music events, for example, it’s likely that you’ll see plenty of canopy roofs.

When it comes to sun protection, canopies tend to be the most effective in places where the sun isn’t too intense. Most canopies use fabric that isn’t designed to completely block the sun’s rays but, rather, to simply provide a relatively shaded space.

What Is A Pergola?

Pergola roofs are, in contrast to canopies, completely immobile. When they’ve been set up in a particular space, that is where they will remain.

Many people set up pergola roofs in their gardens, due to the fact that pergola roofs consist of an open structure and a slatted roof. Because of this, it’s easy for plants and vines to wrap themselves across a pergola roof.

Unlike canopies and gazebos, pergolas aren’t designed to completely block out the sun. Rather, pergolas consist of a slatted roof, which allows the sun to penetrate the roof. That way, the sun can shine down on the vegetation that is directly below the pergola.

What Is A Gazebo?

Most of the gazebos that you can find are very large and completely immobile. Much of this is due to the fact that gazebos are meant to shelter one very particular space – often a patio area in a backyard – and they’re meant to last for many years.

In contrast to canopies, which use fabric roofs, most gazebos use roofs that are made of hard materials. Materials such as metal, wood, and plastic. Because gazebos use those kinds of materials, they are much better at proving a space that is completely shaded.

As a result of the design quality that most gazebos offer, they are one of the most expensive outdoors shelters that you can buy. To go along with that, it isn’t always easy to find a pre-assembled gazebo, so you often have to buy a gazebo kit and assemble the shelter yourself.

Which One Should You Buy?

It depends entirely on what you need in a shelter. Canopies, pergolas, and gazebos are all a bit different from one another. Because of that, they each provide a slightly different experience.

If you are looking for a shelter that is very affordable and completely mobile, then you can’t go wrong with a canopy shelter. But, it’s worth noting that canopies aren’t always great at keeping out the sun, which makes them less-than-ideal for places that are especially hot.

If you need a shelter that looks great in a garden and allows sun to come through, then a pergola is a wonderful choice. Pergolas aren’t very good for keeping the sun out, but they look very nice and add a lovely aesthetic quality to any garden.

For a shelter that is durable and capable of completely shielding a space, a gazebo is the right choice. But, they are very expensive, and can be a little difficult to set-up.

3 Examples Of Each Brand

The ABCCANOPY Pop Up Canopy Tent is designed to cover a space that is no more than 10 X 10 square-feet. Because of this, it can cover up to ten-people at any given time, and up to four-tables.

Setting up this canopy tent is extremely easy. Everything you need is found within the bag that this canopy tent comes in. Plus, the bag has wheels, so it’s easy to move the unassembled shelter to different places.

When the shelter is set up, it will protect your space from intense UV rays and water. It is 100% waterproof, which ensures that no water will pass through the tent.

The Backyard Discovery Cedar Pergola covers a space that is 10 X 10 square-feet. It consists of strong sculptured beams and cedar upright posts that have been pre-stained. But, to set up this pergola, you will need to assemble it yourself.

Since this pergola consists of strong sculptured beams and cedar upright posts, it’s very durable. It will last for many years, assuming that you take the time to clean it on a regular basis.

While the roof consists of many slats, none of the slats are particularly large. Because of that, sun is able to flow through the shelter, but not enough to disrupt the shade.

From Quick Set, we have the Quick Set Escape Shelter Pop Up Gazebo. Unlike most gazebos, this gazebo is mobile and can be set up in just forty-five seconds. Because of this, though, it doesn’t always do a great job at protecting you from UV rays – but, it is completely waterproof.

With this gazebo, you are able to cover a space that is up to 94 square-feet. Inside of the gazebo, six-to-eight people can easily fit.

The entire gazebo is held in a bag. In this bag, you’ll find the tent stakes and the rope. Setting up this gazebo is very easy, due to the simplicity of those components.

Ultimately, canopy, pergola, and gazebo shelters are all a little different from one another. But, despite these differences, all three shelters are incredibly useful. Regardless of which shelter you choose, you will be more than pleased with the results. 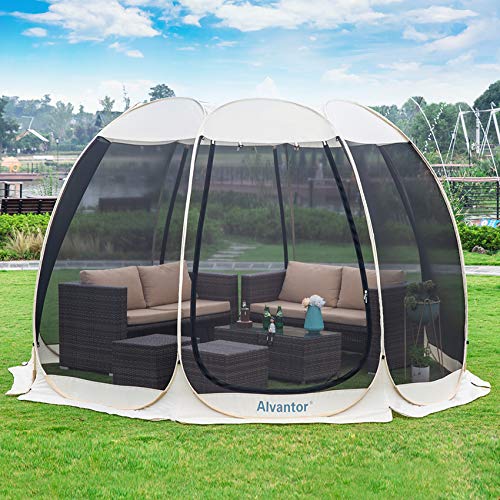