When you learn about these different design qualities, you’ll be able to determine which fan is better for you, in terms of meeting the needs that you have.

What Does The Rowenta VU5670 Turbo Have To Offer?

The Rowenta VU5670 Turbo is a standing pedestal fan that is designed to be quiet. It isn’t loud or annoying, as many other fans are.

Not only is the Rowenta VU5670 Turbo a very quiet fan, but it’s also an exceptionally powerful one. It’s able to deliver some very powerful airflow, due to the power of the motor and the speed of the fan’s blades.

If you choose the highest fan speed, then the Rowenta VU5670 Turbo can deliver airflow of 2,436 cubic-feet per-minute. That’s extremely fast, and what this means is that you are able to push cool air within your space in a very quick period. So, if you need to get cool, then just sit in front of this fan, and cool air will blast on you.

Of course, as with most standing pedestal fans, the Rowenta VU5670 Turbo can oscillate. The head of the fan, which has the blades, can move back and forth, pushing air all across the space that the fan is pointed at. If you do this, then cool air is able to flow into your space much faster than it would be without the feature, and it will be able to pick up more cool air, in general.

Right underneath the head of the fan, there is a small control panel. On this control panel, there are a few different buttons, and these buttons correspond to five different fan speeds. Three of these fan speeds are “Low”, “Medium”, and “High”.

These are the conventional fan speeds that you can choose from. But, there are two other fan speeds, which are more unconventional. One of these fan speeds is “Silent Night Mode”, where the fan makes very little noise but continues to run, while you are asleep. And then, the other fan speed is “Turbo Boost”, which is when the fan runs very quickly and can push air all across your space extremely fast.

If you don’t want to have to get up and use the control panel every time you want to change a setting, then you can use the remote control. On this remote control, you’ll see the same buttons and features, but you’ll also notice that there’s an eight-hour timer feature. This is a useful feature if there are certain times you would like the fan to be on, and certain times you would like it to be off.

In the end, the Rowenta VU5670 Turbo is a great standing pedestal fan! It’s more expensive than most, but it’s very fast, very well-designed, and for what you pay, you get a great device!

What Does The AmazonBasics Standing Pedestal Fan Have To Offer?

In comparison to the Rowenta VU5670 Turbo, the AmazonBasics Standing Pedestal Fan is quite a bit less advanced and elaborate.

Within the head of the fan, there are two fan blades that go across from one another. Each fan blade is well-designed and fairly large. When you turn the fan on, these fan blades do a good job of pushing air into the space that they’re pointed at.

Right underneath the head of the fan, there’s a small set of buttons. Each button corresponds to a different speed setting, as well as a different airflow mode. And, of course, there’s a button that allows you to activate an oscillation feature.

Then there is the “Nature” mode, and Nature mode is when you want a light and soft breeze that feels good and harmonious. The last airflow setting that you can choose from is “Sleep” mode, which is very similar to Nature mode, but a bit heavier.

If you don’t want to get up and use the control panel whenever you want to change something, you can use the remote control that the fan comes with.

In the end, the AmazonBasics Standing Pedestal Fan is very well-made. It’s well-made, and it’s also very inexpensive. You don’t need to spend that much money to purchase this standing pedestal fan.

It’s not as powerful as the Rowenta VU5670 Turbo, but if you’re just looking for a decent standing pedestal fan that is powerful enough, well-designed, and affordable, then the AmazonBasics Standing Pedestal Fan is a very good choice! 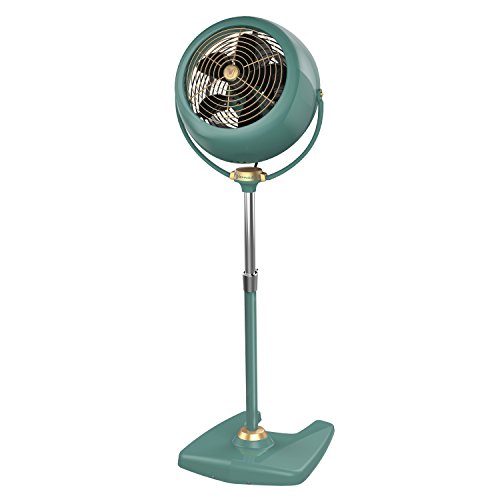