Today we will be looking at the similarities and differences between the Empava and GASLAND Electric ovens. These appliances are both modern, efficient, and will fit just about anywhere–but we’ll take a deeper look so you can ascertain which one will suit your personal preferences. 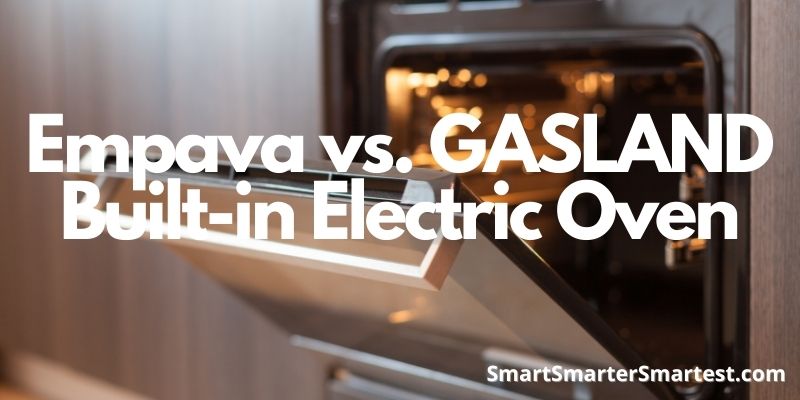 This smaller oven is full of power and versatility. It’s sleek, modern, and able to fit not only in your traditional home kitchen, but in offices, your RV, and even a smaller apartment that doesn’t already have an oven.

Don’t let its economical price and size fool you, this oven is fully equipped to handle anything you’d throw at your typical large-sized convection oven and more. It’s enabled with no less than 10 cook settings, not least of which are a 360-degree rotisserie setting, convection roast, and true convection broil.

The Empava is built with a forced cool exhaust, a handy interior light has 2 layers of black tempered glass to prevent burns as well as a convenient child lock. It is 2.3 cubic feet and has an energy output of 3400 watts.

This oven heats quickly, but never fear: the Empava uses a specific ‘low emission’ coating, this oven ensures that the heat stays in while the exterior remains cool.

Almost entirely covered in suave black tempered glass with minimalist mechanical knobs, this oven has class, and style and is proudly supported in the USA.
Versatility & function
This modest oven unit can easily fit under most counters and is even suitable for use in a Recreation Vehicle.

It boasts 6 cooking functions including proof, bake, and convection broil. You’ll never have to worry about being able to cook your favorite dish. The control knobs are sleek and mechanical, while still offering a modern look and easy-to-read controls.

The GASLAND is ETL certified; having been tested and found to meet OSHA standards, and therefore allows the oven to be used not only in the USA but in Canada as well.

Not only this but the oven is entirely made of 3-layer tempered glass, which keeps heat inside and little fingers unburnt. Rust resistant and durable, you can be confident that this oven is in it for the long haul.

The inner enamel is very easily cleaned, and the oven door is detachable for convenience.

These two brands are quite similar with both being highly reviewed and respected. Both feature black tempered glass.

Both units feature a 5 layer shelf, rapid heating technology, self-cleaning capabilities, and the ability to be installed under a countertop or within smaller dwellings like recreational vehicles or apartments.

The appearance of the two units does differ. The Empava is actually mostly stainless steel and black tempered glass and a touch LED display.

The GASLAND has aluminum alloy on the handle only, with the rest of the oven being the sleek black glass. The GASLAND also features unique mechanical knobs instead of an LED display.

An interesting thing to note is that the GASLAND does not actually display the time due to the classic knob design. This might be a non-issue to some, but many people prefer being able to have the time display on most larger kitchen appliances. It’s just one of those things.

Another notable difference is the energy output. The GASLAND has only a 2000 wattage output while the Empava has a much higher 3400 watts.

The GASLAND also is equipped with only 6 cook settings while the Empava has 10, including a tempting 360-degree rotisserie setting that can really only be a benefit.

Having a functioning and safe oven is so important and plays a major role in cooking healthy foods in larger quantities. If you live in a smaller apartment and enjoy cooking, a microwave and a mini stove with one or two burners can only take you so far.

If you’re looking for aesthetic, safety, and function – both are more than suitable and will last a while. However, if you’re after the slightly finer things in life and enjoy a good dose of creature comfort, then the Empava is for you. The beautiful LED touch display and extensive cook settings are what truly sets it apart.