While Dyson continues to manufacture vacuum cleaners, above all else, they have dipped their toes into other products, as well. Products such as hair dryers, humidifiers, and fans.

The Dyson Cool is one of their latest and most unique product lines, and while it isn’t as popular as the vacuum cleaners they manufacture, the quality is certainly here, and there are a lot of really unique and interesting features and attributes that the fans in the Dyson Cool product line offer.

One last thing to note is that these are not inexpensive fans. Dyson specializes in products that might be considered “high-end”, and these fans are definitely part of that same grouping. So, as a result of this, you’re going to be spending a decent chunk of change, if you want to buy one of these fans.

Now, with all that being said, let’s dive right in!

What Does The Dyson Cool AM06 Offer?

Weighing just 6.8 pounds, the Dyson Cool AM06 is light. And, it isn’t that big, either, although, it is good at creating a nice, steady stream of air that can encapsulate a fairly large space. Why this is, we’ll talk about in just a moment.

As for the overall design, it’s incredibly simple, and quite pleasing, on an aesthetic level. That is, of course, assuming you like minimalism.

On the bottom of the fan, there’s a little platform that holds the main fan. Right on this platform, there are vents that circle around the entirety of the platform. These vents suck in air. And on top of the platform, there is a circular structure that is the fan itself, but you’ll notice that there are no blades in this structure. Instead, you can see right through it, which is quite unusual, for a fan.

Here’s how the Dyson Cool AM06 actually works, it uses something known as Air Multiplier technology, and this technology is able to take in air from the vents on the platform that holds the main fan structure, and then it “multiplies” that air.

It doesn’t actually “multiply” the air, but it creates an incredibly steady and powerful stream of airflow that flows out of the fan structure, rather than through the use of blades. This entire air pathway is incredibly simple, and as a result of not being dependent on blades, the Dyson Cool AM06 is incredibly quiet.

You can alter the speed of the airflow, at any time, using a small remote. And, using this same remote, you can also choose where the air flows to, which makes it easier to throw some cool air into another part of the room.

Using that same small remote, you can also turn the fan on and off, and you can set a timer that turns it on and off. You can set this timer in fifteen-minute intervals, at the lowest, while also setting it to run for hours and hours.

When you’re done using the remote, but you don’t want to set it down somewhere that you might lose it, you can attach it to the Dyson Cool AM06, since it is magnetized.

At the end of the day, if you are looking for a smaller fan that is incredibly powerful, quiet, not too energy-intensive, and very well-designed, then the Dyson Cool AM06 is a fantastic choice, and it definitely won’t disappoint you.

What Does The Dyson Cool AM07 Offer?

Weighing nine-pounds, the Dyson Cool AM07 is a little heavier than the Dyson Cool AM06. And, you’ll notice that the platform itself is the same size and shape, but the fan is much taller and is more of a rectangular circle since it is quite tall but thin.

On the platform itself, there are these little air vents. Air from the room is sucked into the fan, and then it goes through a series of air channels that utilize Air Multiplier technology. This technology ensures that the air flow is constant and strong. So, as this is happening, the airflow remains consistent, above all else. Due to the air channels, and the lack of blades, there is very little sound being produced.

You will be using a small remote control to access the different features of the Dyson Cool AM07. Things like accessing the ten different airflow settings, which are designed to accommodate a wide variety of different rooms. And, you can change where the air is flowing to, as well as setting a timer. 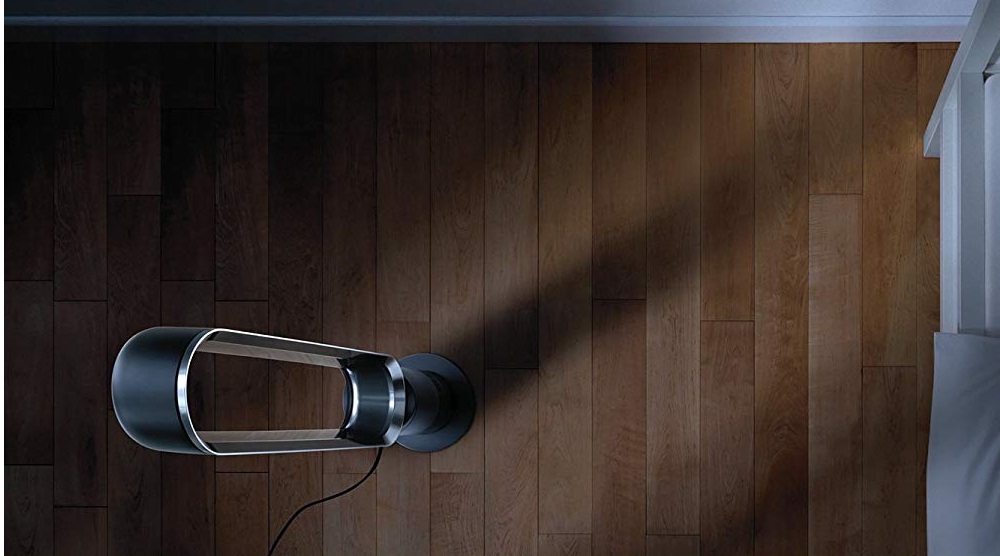 What Does The Dyson Hot + Cool AM09 Offer?

The Dyson Hot + Cool AM09 isn’t just a fan, it is also a heater. It serves those two purposes, and it serves them very well.

With the fan, the AM09 uses Air Multiplier technology to pull in air, through the vents that are all around the platform the fan stands on, and then it throws that air through a series of air channels that go out the main part of the fan.

With the heater, the AM09 does the same thing, but instead of throwing cool air around, it is throwing heated air around. You can adjust the temperature that this air is being heated at, and a thermostat helps to ensure that the exact temperature you desire is being reached.

Just as with the AM06 and AM07. There is a remote control that helps you access these settings and features. But, on the front of the AM09, right underneath the air vent, there is a little display that shows the target temperature, and other relevant data that the Dyson Hot + Cool AM09 is picking up.

One of the most interesting and useful things about the Dyson Hot + Cool AM09 is that it offers two very useful airflow settings that you can use for both the fan and the heater.

Focused Mode is the first mode that you’ll notice. And, in this mode, the AM09 directs air towards the space right in front of it, as if it was firing a jet of air. This jet of air has a fairly long-range, and if you just want air to be shot right in front of you, it’s a great choice. And then, the second mode is Diffused Mode, which projects air all across the room, so that it reaches more of the space.

Ultimately, if you want the most versatile and powerful Dyson fan, then the Dyson Hot + Cool AM09 is the best choice, and the heater is incredibly useful, as well!